Skip to content
scroll down for photos of the ride So, we did the 104-mile St Crispins Day ride. It started at midnight at went through the toughest terrain, meaning Central London at 1am on a Saturday, and crossed back through jammed city streets at noon on Sunday. The ride organisation needed work, and add to that the close-to-freezing temperatures left us all dealing with numb toes, frozen faces; to have achieved anything in those conditions was an achievement. Many people received punctures in the first 10 miles – it was not uncommon to see people clustered around an upturned bike, and we ourselves got delayed in helping one of our team with an early puncture, but we gained a team-mate in the good samaritan Mark – the only man who had a spanner and was willing to stop. My bike lost a rear spoke 30-miles in at Windsor, which I thought would be the end of it for me. But my wheel held up and got me to the end of the ride and home again – only to reveal a puncture this morning. I don’t know when that happened.
The most poignant detail is that it covered my whole UK based life, with the exception of university – we passed [the] hospital where I was born, the house I was raised in, the school I went to until uni, the drama school I went to as a teenager, old friends’ houses, my flat in Clapham where I lived in 2007, and the routes of many bike rides I’ve taken in recent times home, after late nights at work have forced me to skip the trains and get home by any means necessary. It felt like a tour that a rock band would do of their old material, before they put it behind them and look to the future, unfettered by the past. 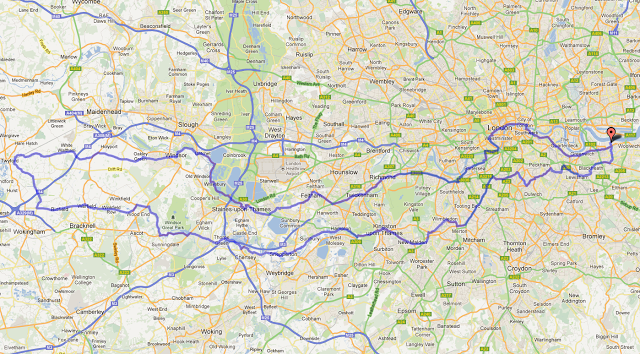 Here are some photo highlights from the ride. The complete set can be seen here.