Skip to content
I started the sketch, based on a photograph of a Bombay cab, before realising that I had the line of the car wrong. There is so much I’d like to change about it, the perspective of the car is all wrong, it looks like it’s been bashed into a wedge shape (which many Bombay cabs have been, but still). I then experimented with the red to add reflection detail to it. Anyway, not entirely successful, but in keeping with the ‘warts and all’ approach that I am taking in this project, decided to send and publish it regardless. 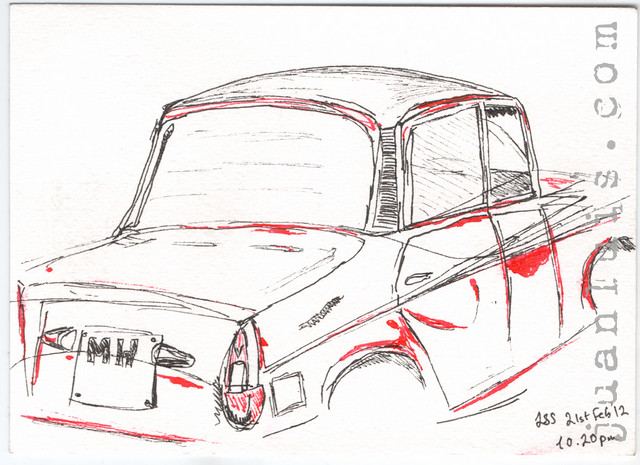 Michelle was ruminating on the malleability of vowels in British English, something I’d often thought about in relation to Spanish but not necessarily to American English. The example she gave was ‘Tube’, which in England can sound like ‘Tiieaaooouube’, a real ski-jump of a sound before launching into the end of the word. I even mimed myself on a jump as we said it. Paul the Canadian nodded in agreement. James, taking offense at his native tongue being so sullied by the true manglers of English, those pesky colonials, threw up his hands in mock horror and said with a great US accent ~ ¡OH MY GAWD!