I got a call to be an extra in a shoot for [Star Wars] Episode II. What part, I wondered? A JEDI. A real, honest to goodness Jedi. This was for the scene where Obi-Wan goes to see Yoda in the Jedi temple, and they wanted Jedi to populate the temple, walking here and there. This is the first time we would see Jedi other than the main characters we know, or members of the council. How did we get picked (there were about 5 of us, if I remember)? Blind luck I think. They had a number of Jedi costumes from filming the arena battle so they fitted us with whatever was at hand. What bigger dream could there be than for a fan to play a REAL JEDI in the film?? As I say, we weren’t really cast, a decision that they would regret later as George felt we weren’t really all that interesting looking. Plus, all Jedis (save Mace Windu) and the weird aliens, have characteristic hair styles, beards, braids for Padawans, and the costume/stage crew didn’t put any real effort into us. It was a lesson I would see over and over again, the stage crew worked diligently to execute the shots, but it was sheer luck whether someone was there who could provide direction, continuity, or who cared about the details of what was going on screen. We walked to and fro in groups and individually, towards the camera, away, across the frame. We walked, ran, even did a bit of running. We couldn’t take pictures in costume, so of course we snuck into the bathroom and snapped a bunch of pictures. I was giddy. Over the following weeks I watched the composite progress, and for a while I shared full-frame placing with Ewan McGregor. My dream was in sight… until I was replaced with another of the Jedi, and I got pushed far into the background so I am all but invisible. My destiny lay along a different path.

Here’s a clip and still of me in the Jedi robes. I waited to post this so I could find this in my archives, but had an hour or so of panic as all my backups came up empty. Tucked away in the trash folder I found it. I hate technology sometimes. 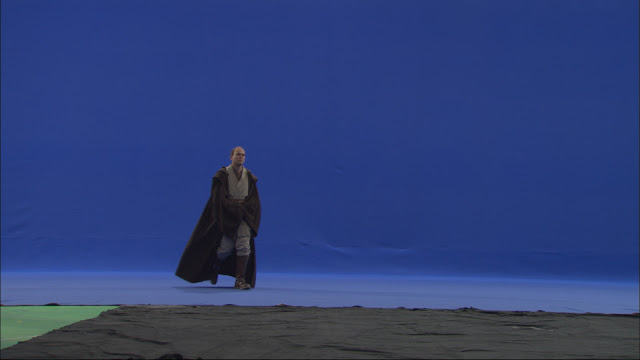